For the second time in three weeks, everything is closed because of inclement weather in the forecast. So far, this little stash of ice pellets are the only evidence on the ground here that things are going to freeze. 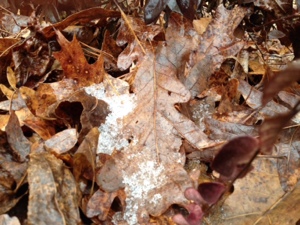 The forecast is dire though –

Winter Storm Pax [...] begins its most dangerous phase Tuesday night into Wednesday, when rain changes to freezing rain from Eastern Georgia through Central South Carolina. As much as 1” of freezing rain is expected in Augusta, Georgia and Columbia, South Carolina, and widespread power outages would result if these ice amounts materialize. Atlanta, Georgia, which was shut down by the 2.6” of snow Winter Storm Leon brought to the city on January 28, is expected to receive a nasty mix of freezing rain, snow, and sleet Tuesday night and Wednesday from the new storm, making travel dangerous or impossible. Just a slight shift in the track of the storm or atmospheric conditions could greatly alter the amount of snow and freezing rain this storm brings, and residents impacted by this storm should follow the latest forecast updates.